The White Plains is presumably Yume Nisshi's answer to the Monochrome World of Yume Nikki. This is also where the Horns effects is located. It can be accessed through the Sacrifice Area.

The Plains is a black and white world with symmetrical patterns etched into the ground. Some small areas can be accessed via numerous teepees, one of which leads to a strange waterway containing Nanashi. The area also contains what appears to be a slain monster that has fallen to the ground.

This area is also home to a wandering, nameless NPC who appears to be wearing a mask. The mask resembles the face of a shy and trembling creature found in the Snow World. They don't react to any effects save for the Horns, and can be killed normally. 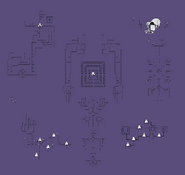 Complete map of the area.

A masked denizen.
Community content is available under CC-BY-SA unless otherwise noted.
Advertisement