Trisha or Trish is a young girl who spends her time in her bedroom, located off of The Marble Hall. It is speculated that she is Pholus' sister.

Her name comes from the Chipset in the game's files that labels her room as "trishroom."

Trish is thought to be the sister of Pholus since she shares his heterochromatic eyes; one is blue-grey, the other black.

Her skin is a sickly greyish color. The right side of her hair is pulled into a low ponytail, while the other side is loose and stringy. Her hair makes her resemble the silhouette in the game's title screen.

Trish stays in her room at all times, where she is sometimes seen playing with a very small ball. Other times she walks around aimlessly.

The Horns effect will affect her, and if you kill her with the Nail bat she does not scream like a normal NPC but remains sunken to the floor as a corpse, appearing to leave behind only her head.

Killing her will trigger an event in which Pholus' face turns red and monstrous. If you enter his studio after her death, he will chase you through The Marble Hall. Because killing her elicits the same reaction in him as attacking him outright, it is thought that Pholus is very protective of her.

Trish walks around her room. 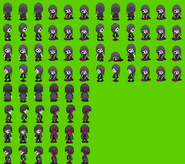 This chipset file is called "trishroom."

Trish playing with her ball
Community content is available under CC-BY-SA unless otherwise noted.
Advertisement