Start a Wiki
The Snow World is one of the main Nexus worlds. It can be reached by going through the blue and white door on the left side of the world. It is most likely a response to the snow world of Yume Nikki; a themed world that appears in many fangames.

The match effect is found here by interacting with the Matchstick Girl, an otherwise normal NPC. Another NPC that can be found here is a strange beaked animal who will curl up if interacted with. It will remain folded over until Usotsuki leaves; if she interacts with it again, it will tremble slightly. The head of the creature resembles a masked NPC in the White Plains.

A link to the Church can be found here by stepping on a drifting stained glass portal in the snow. A single brick wall contains a doorway to what appears to be a well with snow falling lightly down the center. 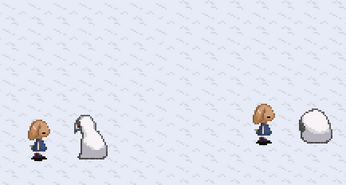 A shy denizen of the Snow World.
Add a photo to this gallery
Retrieved from "https://yumenisshi.fandom.com/wiki/Snow_World?oldid=5084"
Community content is available under CC-BY-SA unless otherwise noted.