Back to page
Edit

Nanashi is a recurring girl with long white hair and a hospital gown found in Needle World. Her name comes from the file-given title which is Nanashi; it translates to "no name."

In the Needle World[]

Continuing to hit her after she starts to bleed reduces Nanashi to a crawling and bloody heap. Hitting her further will kill her. She must be killed in order for Usotsuki to leave the Needle World.

In the White Plains[]

A different version of Nanashi can also be found in the White Plains as of version 0.03. Although it is hard to tell, she is identifiable as the same NPC, as the file in the Charset folder of the game is labeled "nanashi-box."

It should be noted that she is one of the only characters in Yume Nikki and its fangames to die in a more realistic manner; another significant example of this would be .flow's Sabitsuki in the third ending.

It is speculated that she is somehow related to Shinjitsuki or that they are even the same person, since they both the same CharSet and are visually similar. However, Shinjitsuki does not have a special reaction when he is visited after Nanashi dies. This is unique considering that killing one of two "paired" NPCs will cause a reaction from the other; this can be seen in the cases of both the Faceless Couple and Pholus and Trisha. 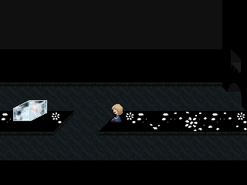 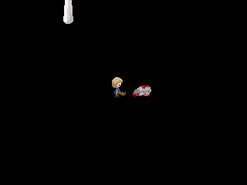 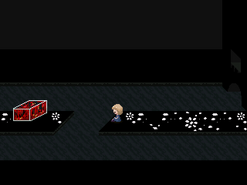 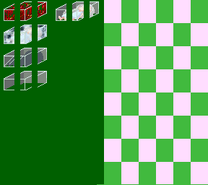 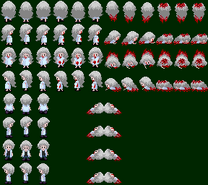