The Faceless Couple are a couple that can be found in the small house in Snowy Forest. They consist of a blonde woman and a dark haired man who resembles Pholus. Usotsuki can climb through their TV to access part of the NES World.

The Faceless Couple are usually unreactive, but will respond to a number of effects.

The woman will follow Usotsuki around if she interacts with her using either the Porcelain Doll or Proto effects. However, the Porcelain Doll causes a negative reaction in the man, and he will turn away from her. Like a normal NPC, the woman will flee from the Nail bat, but the man will follow her if she wields it. If the woman is struck with the bat, the man will take damage for her, and she will appear to mourn his death if Usotsuki leaves and comes back.

Their filename is called 'Yamanashi.' On the Yamanashi file you can find a fully useable sprite set of the man bleeding, and one sprite of him bleeding in an outfit with a zipper. This may possibly be a straight-jacket, and also bears a resemblance to the Bone Maiden.

If Usotsuki kills either the man or the woman and leaves the house, the Snowy Forest will darken and distort in appearance. Re-entering the house shows parts of it to be cracked in half and oozing blood.

The woman will sit against the wall quietly while wrapped up in the sheet that was previously in the man's room; she is no longer reactive to any effects. The man will be dead; if the player struck the woman to activate the event, he has taken on all of her injuries for her.

It is thought that the couple were in some sort of romantic relationship, or even had guardianship of Usotsuki. The two were close by whatever means, and the man was particularly protective of the woman, supported by the event that occurs if you attack one of them.

While the woman treated Usotsuki kindly and rewarded her good behavior, the man shunned her or regularly punished her. This is supported by the effects to which the couple reacts. A child being treated by one guardian as "good" and as "bad" by the other can often lead to them having conflicting behaviors to match separate expectations of them, and this may have been what happened to Usotsuki to give her the deceptive name of "liar." 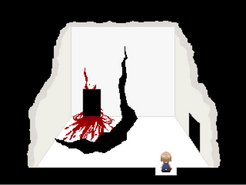 The inside of the house when the man has been killed. 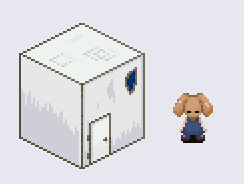 The outside of the house. 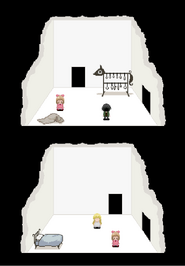 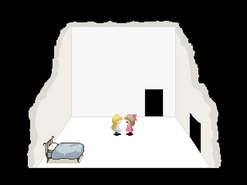